The History of the Expo

The history of the Expo goes back to the Industrial Revolution, more precisely to 1851. The Great Exhibition of the Works of Industry of All Nations, organised in London at the initiative of Prince Albert, the spouse of Queen Victoria, is considered the first World Fair. The exhibitions that followed, gradually becoming a regular fixture, featured debut presentations of a number of industrial and other achievements, including the Eiffel Tower, the typewriter, the telephone and even ice cream and hamburgers.

Modern world exhibitions, now known under the name "World Expo" are some of the biggest international events. Millions of people visit every Expo, where countries are showcased in pavilions designed with great care and forethought.

The themes change from one Expo to the next, but the events' core concept remains faithful to the original idea of presenting new findings and state-of-the-art achievements in science, technology, economy and society, and to place the spotlight on progress and education, while building bridges between countries, organisations, businesses and progressive individuals from across the world.

Lisbon, Portugal: The Oceans, a Heritage for the Future 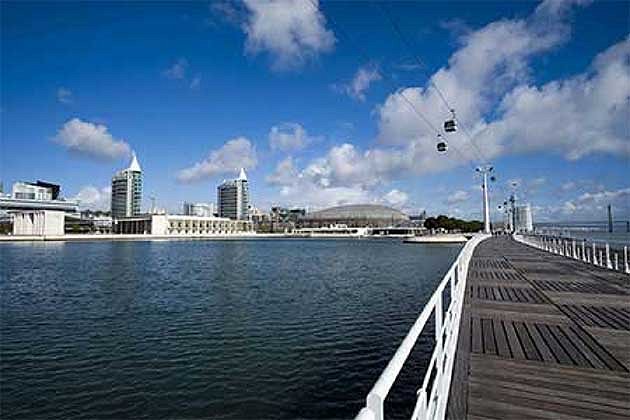 The Expo in Lisbon was the first at which Slovenia was featured with a stand-alone modular pavilion. Being a young Central European country focused on environmental issues and with great potential in business and tourism cooperation, Slovenia used the slogan Slovenia - Terra Mystica, representing the natural flow of waters and aiming to present the country's natural beauties. Visitors to the pavilion received little jute sachets of salt harvested in Slovenia, drawing attention to the country's efforts to protect and preserve its wealth of natural heritage. 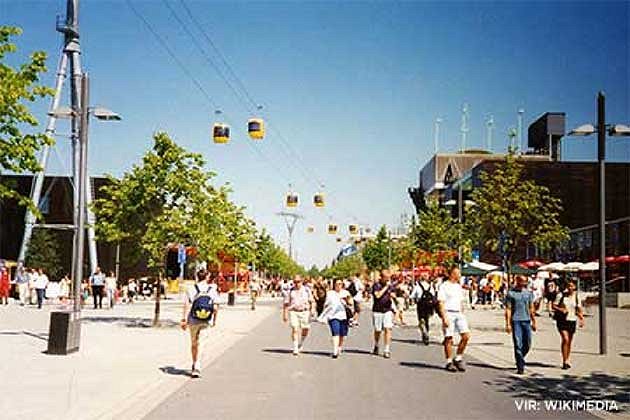 In Hannover, Slovenia was featured in an indoor pavilion, presenting itself as a beautiful country with great tourism potential, and an open country building on its own know-how. The presentation concept Life and Work was based on the main theme of the Expo. The pavilion featured a number of computer monitors giving the visitors the opportunity to experience Slovenia's achievements in culture, sports, science, technology and business.

In the light of the Better City, Better Life motto of the exhibition, Slovenia's slogan for the Expo was Open Book because the exposition took place just as Ljubljana held the title of UNESCO World Book Capital 2010. Visitors to the pavilion walked among eight big open books, each with its own story: the Ljubljana National and University Library, designed by the renowned architect Jože Plečnik, modern Slovenian design, beauties of Slovenia, the sea path, the Kras region, the modern Slovenian house, Herman Potočnik Noordung and Living in the End Times, a book written by philosopher Slavoj Žižek specially for the Expo 2010. Slovenia's pavilion drew more than 3 million visitors and was awarded the golden medal for creativity. 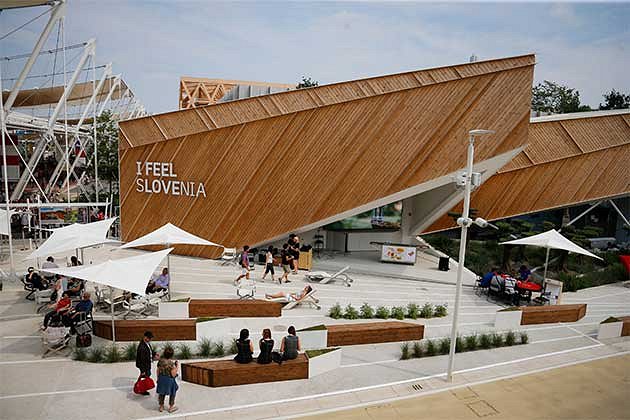 Slovenia's stand-alone pavilion bore the slogan I Feel Slovenia. A number of interactive elements and the pavilion design itself presented the country as a green, active and healthy destination. The pavilion featured five segments dedicated to the salt pans, honey bees, thermal and mineral waters, hiking, cycling and black carbon measuring. The five segments created a diverse composition reminiscent of Slovenia's geography; at the symbolic level, the composition reflected the sprouting of the underlying ideas of sustainable development. After the exhibition, the pavilion was relocated to the Pomurje region, becoming a key feature of its tourism and business promotion.